Legos: the bane of many parents existence.

Those tiny little squares and rectangles that you seem to find all over your house. You clean them up just to find more of them...are they multiplying?! Those wee-little pieces of plastic with sharp edges that just lie in wait to be stepped on.

Legos: the cause of much mess and many injuries in your home and mine.

I'll admit it - I've thrown them away. If you tell my kids, I'll deny it. The rogue Lego that gets swept up with the broom or vacuum cleaner, it usually makes its way to the trash can around here. Catch the dog chewing on one? Yep, another bites the dust.

I've locked them up in closets, hoping to keep them contained.  They were forgotten for a while, praise be.

But can I tell you something else about Legos?

For the longest time, I didn't know if my son would ever play with them...and that made me a little sad.

My older son has always loved Legos.  We have so many kits - from Star Wars to Adventure Time.  He and my husband would build them together...well, I think Daddy did most of the building, but it was a bonding experience nonetheless.

But my younger son, he is autistic.  He just never really showed an interest in them. For years, he didn't really play with any toys at all.  It might sound silly, but playing with Legos almost seems like some sort of childhood rite of passage...and I felt robbed thinking we might never play with them.

A few days ago, I noticed him carrying around some Legos...but seriously, where did he even get them?! I'm telling you, they must spawn out of thin air and just keep multiplying...

Last night though, he had built something!  My husband looked at him and said, "What is that?" He responded, "Piano," as he pretended to play a song on the tiny keys that he had crafted. Then he took a little Lego man and pretended to have him play the piano. 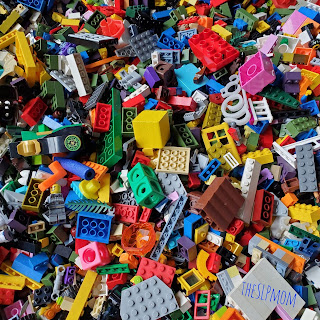 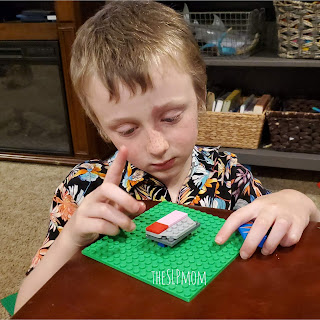 So today, I gathered up all of the Legos and brought them into my living room.  We dumped them out on the floor...and he has played with them all morning.

So, yes, my floor is covered in Legos.  Yes, I will probably step on a few and say some not-so-nice words. Yes, some still might even find their way into the trash if the mood strikes me...

...but my kid is playing with Legos, and I am so proud.

Little things like this - like "just" playing with Legos...when you thought they might never happen? They're so special and cool and exciting.  Don't take them for granted.