Who Will Love Him When I'm Gone?

I had a conversation with my mom last night.  It was something that I think about every single day, but rarely say aloud.  It was a topic that - for my sanity and survival purposes - I have to push to the back of mind.  It is always there, but for now, I can't let it dominate my thoughts or else I'd drive myself crazy with worry:

Who is going to take care of Colin when we are all gone?

If your child is typical, you plan to raise them for about 18 years.  You don't cut ties with them by any means, but they will go on to live their own lives.  They can take care of themselves, be independent, and not really need you like they did as a small child.

My son has autism, so I don't really know what his future holds.  We expect to be taking care of him our whole lives.  I will take care of him as long as I can.

But what happens when I die?

He's five.  What parent of a five year old is worrying about what will happen to their child when they die?  A parent to a child with special needs, that's who.

Our children need us.  To help them, protect them, keep them safe.  To make sure they're fed.  To assure that their most basic needs are taken care of.  You wonder who will step up and do all of these things for your child, but the real question is this:

who else will love him as much as we do?

My mom said, "He has Finley.  Finn will take care of him."

I think about this so often.  It is so huge to ask a sibling to care for their brother or sister when you're unable to do it yourself.  You hope and pray that they want to, but to ask such a thing?  That is big.

Then, we went to church this morning.  As we were walking through the parking lot, Colin took a quick little step ahead of me...Finley immediately grabbed his arm, without me even asking him to.  He held onto his arm the whole way.

When we got inside, Colin took off running up the stairs...Finley was right behind him.

When we got up to the sanctuary, Colin started to crawl under the pew. After the prayer, I see Finley down there too...he said, "I was just trying to get Colin."

During children's music, Colin was sitting in the back corner seat, alone.  Finley turned around, saw him, and immediately got up and went to sit with him.

I tell him all the time, and it's true: he is the best big brother in the wide world.  Colin has no idea how blessed he is to have such a big brother.

People see Colin and they know that he has autism.  What they can't see is how much his autism affects his brother.  Finley has always been an old soul, and I think it's because God knew that he would have a great responsibility as Colin's brother.  One days like this, I look at Finley and know - I don't really have to worry about who will love Colin when we are gone...because his big brother already loves him that much too. 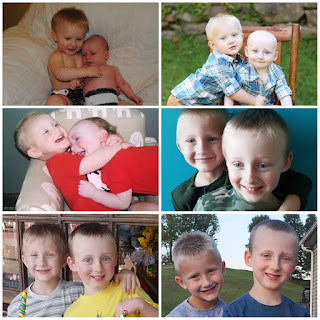