My birthday was this week, and every year, Facebook shows me one of my most favorite pictures ever: 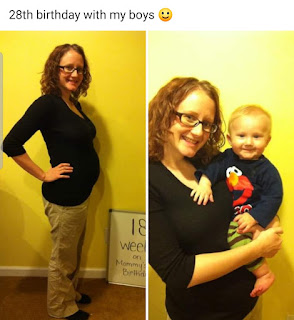 I was 18 weeks pregnant with Colin.

(My husband-slash-photographer was 29...I always have to remind him that he is - and always will be - older than me.)

I remember this phase of my life.  I was showing already (second baby problems!), and many strangers had a lot to say:

"Wow.  You're gonna have your hands full."

"Pretty close together, don't ya think?"

"You do know what's causing that, don't you?"

What those people didn't know was this:

I had suffered from infertility.

I was told that I wouldn't be able to have babies.

We had to do fertility treatments.

Our first pregnancy was ectopic and required emergency surgery.  I had seen and heard my baby's heartbeat before I went into surgery to terminate the pregnancy because my life was in danger.

We lost two of them.

Those were hard times for me.  Everyone had advice during our times of infertility and loss, too:

"You're trying too hard. It will happen when you stop thinking about it."

"You should just adopt. My neighbor's sister's friend's cousin's hairdresser adopted and got pregnant the next month."

Then when we lost our first baby:

"It's for the best. There was something wrong with that baby, that's why that happened."

So to those strangers who had advice and comments for me, here's what I want you to know:

When someone goes through infertility, it is real...and it's real hard.  Medical issues are just that - they aren't things easily resolved by "just adopting." (Which, Come on, there is no "just" to adoption.  It is a big deal.)  Unless you've lived it, you couldn't possibly understand, so there is probably very little you can say to "help."

But you know what you could say?

When someone loses a baby, no matter how far along into a pregnancy, it is awful.  They're going to be sad, angry, frustrated, bitter....that's normal.  Writing it off as, "not meant to be..." well, that hurts.  That was their baby.  Their loved baby.  Their missed baby.  Just know that. They're going to be sensitive to others' pregnancy announcements.  Know that too.  They aren't bad people, but they are hurting.

People looked at me with a seven month old and almost five months pregnant and thought I was nuts.  Well, in all honestly, Colin was not planned at all.  I was infertile, remember?!  Yet God has a sense of humor and here he is.

Here's the other thing that people didn't understand:  I felt so blessed to have my perfect little baby boy.  For the longest time, I thought I'd never have a baby, so when he FINALLY came along, I was over the moon.

Then to find out that he would in fact get to have a sibling?!  Wow.  That was awesome.  I'll admit, I was a little scared and worried because Mr. Finley was a horrible sleeper (and Colin turned out to be even worse than his big brother).  I was exhausted and wondered how I would do this with two babies.  I knew it was going to be hard, but all the good things in life are.

I still look at those boys now -big 6 and 5 year olds - and I'm so thankful for them.  Infertility changes you.  Infertility shaped me more than anything ever had until that point in my life. There is something about being told you'll never have children - to then have the two most beautiful and perfect little boys ever, well, it just makes you appreciate them that much more. 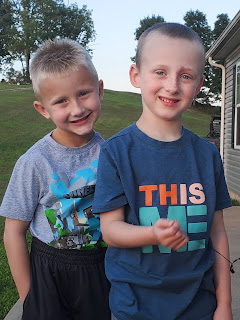 I am very open about our fertility struggles because it can feel so isolating.  I want to let others know that it's okay - you are not alone.  I love that saying, "share you story because it will one day be a part of someone else's survival guide."  I wholeheartedly believe that - we need each other for the hard stuff.