Hearing your child's first words is something that every parent out there cannot wait to do.  Their sweet little voices are just music to Mama's (and Dada's) ears.

So when exactly should we hear those first words?  What should they sound like? 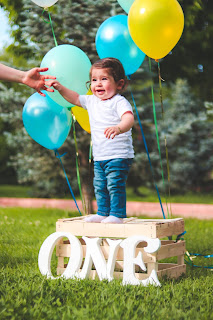 ...but what about that friend who said their baby said their first word at 6 months?

I hear that one a lot, but that is babbling.

We hear babbling in young babies.  It starts with coos and goos, then we hear different vowel sounds, then some consonants come in...so what is the difference between babbling and first words?

Babbling is basically sound play.  Yes, you might hear a baby say, "Mama," but he didn't say it with intent or meaning.  He was just playing with sounds, maybe even copying you as you said "Mama" to him (in hopes of "Mama" being his first word - you know, before "Dada!")  He was just making sounds, though.  This is babbling.

As the baby gets older, they will attach meaning to "Mama."  When "Mama" means - that woman who loves me, cuddles me, feeds me, I love my Mama - then yes, "Mama" is a true word.

Around the first birthday, we anticipate that most children will have 2-6 words.  Those often include "Mama," "Dada," and other "power words" for a baby: milk, night-night, etc.

Many times I have asked parents, "How many words does Johnny have?" I often hear, "Oh, he doesn't have any words yet."  The more we talk, though, we realize that Johnny does in fact have some words.  Here is where the confusion comes in:

true words are anything that Johnny says consistently with meaning.

It might not sound "right" to our grown up ears, but it's a word.  Here's an example:

Johnny has a favorite pacifier.  "Pacifier" is a really hard word, so we wouldn't expect him to be able to say that correctly just yet.  Every time Johnny wants his favorite pacifier, he says, "Pie-pie."  So for Johnny, this is a true word:  he's using it consistently to mean the same thing: his pacifier.

I'm going to let you in on a little speech language pathology secret here:  when children are this little, we aren't really looking to "fix" their speech sounds.  We are more concerned with language.

You can pull up any developmental norms chart - I like ones like this - and see that speech sounds develop in a certain order.  Many sounds are what we call "later developing sounds," so we would not expect a one year old to say those sounds (like R, S, or L).  At the time of "first words," we are looking at language development.  It is 100% okay if little Johnny says "titty tat" for "kitty cat" (for a while!).

Want more information on speech and language development?  Check out ASHA for more.