One thing that I love about social media is that it connects us with people we would never meet "in real life."

I met Ashley, an adult AAC user, in a Facebook group.  She had written a story where she mentioned her AAC device.  I am always so interested in learning more from people who use AAC, so I reached out to her.  She agreed to answer some questions that I had - I hope you enjoy her interview! 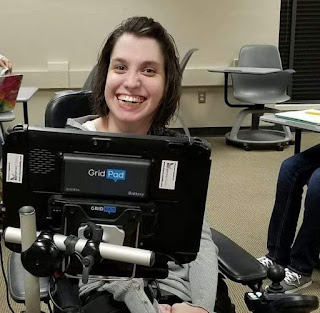 My name is Ashley Mohesky, and I was born with a neurological disorder called cerebral palsy. I am in a wheelchair and use an eye tracking communication device. Currently, I am in graduate school to become a Licensed Professional Counselor in Texas. After I graduate, I plan to work with individuals who have depression, anxiety, bipolar, or chronic illnesses. I also would like to work with parents who are raising children with disabilities. My device is called a Grid Pad (I use it via eye tracking), and it's from a company called Smartbox, located in the UK.
What was it like for you before you had a device to communicate? How did you communicate prior to having the device?
Before receiving my device, I would get angry because I couldn't express my feelings or thoughts. I can talk, but the muscles in my mouth do not function properly, in order to be able to make appropriate letter sounds, so it makes it harder for people to understand what I am saying verbally. I communicated by using modified sign language. For example, if I was hungry, I would open my mouth and point instead. I also communicate with my family by air signing letters. If I wanted to say hello, I would write the letters, one by one, and the individual would repeat it back to me until the word is spelled. I still use this method today when talking with family.

At what age did you start using AAC? How did it make you feel to have it?
I started using AAC around four years old. I was in a special education pre-kindergarten classroom, as my parents did not know how much cognitive awareness I had at the time, though it was apparent that I did have some cognitive functioning. My teacher had a suspicion that I was at a higher level than the other students because I laughed at a joke that someone made when the other students did not. From there I received a device called a Dynavox, and blew everyone away by my ability to use it well. Shortly after I was transferred to general education and excelled throughout the years. I do not remember how getting the Dynavox made me feel because I was so young, but the fact that I tried to program it myself and had to send it off for repairs, indicates that I was ecstatic to have something that could be personalized to my style of communication.


Is there anything that is hard for you today as an AAC user? (Are people patient, Understanding. Etc?)
When people first meet me, they often times don't know how to talk to me because I do use a different means of communication, but once I say a sarcastic remark, the fear of not knowing how to interact with me subsides. I am fortunate enough to not have had too many negative reactions when using AAC in the community.

What advice would you give to parents and children who are embarking on a new AAC journey?
AAC is a complex form of communication that takes time and patience to learn. My advice is to allow the child to learn their device at their pace. Also, it is important to note that even if you know what your child is telling you, encourage them to use their device, as it will help them to become accustomed to it.

What do you want the world to know about AAC?
If someone is using AAC, don't be afraid to strike up a conversation with them. It may take a minute for the person to express what they are trying to convey, but it shouldn't prevent you from talking to them. Everyone has the ability to communicate, AAC is just a different form of it, and it doesn't presume incompetence. 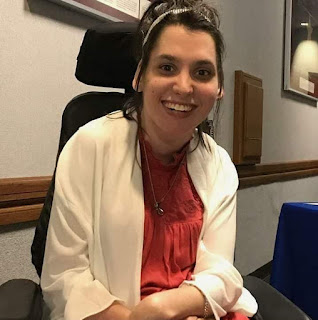 Ashley - Thank you so much for taking the time to answer my questions. I hope that you continue to speak up and advocate for those who communicate using AAC. Good luck in school - you're going to do big things.