I See You, Special Needs Mama

You're chasing your child who runs at any chance he gets.  You're trying to stay calm, but you also know that you HAVE to catch him because there is a road nearby, and he has no fear...and he seems to get faster every day.

You're trying to help your child through a meltdown.  He is kicking, screaming, and going "no-bones-jello-dude" on you, and my eyes go straight to you.  You're sweaty, trying to wrangle your kid.  People are staring, and you're so embarrassed because you know what they're thinking. ("She's a bad mom.  He's a bad kid.  My kid wouldn't act that way.  He needs some discipline.  They should have stayed home if he was going to act like that.")  To others you look calm, but I know you're on the verge of tears.

You're trying something different, going outside of your comfort zone.  You just want him to try things, to be a part of the world...but I see your anxiety too.  You're on edge, just waiting for him to run.  Or scream.  Or throw something.  You're trying to stay five steps ahead, always preparing for the worst, but hoping for the best.

You're not really a part of the group.  Other parents can have a conversation, but you're never fully engaged.  You're always watching your child, half listening to the adult conversation while 100% attending to your child's needs.  When he takes off running, you don't miss a beat, always ready to pounce. I know it's exhausting. 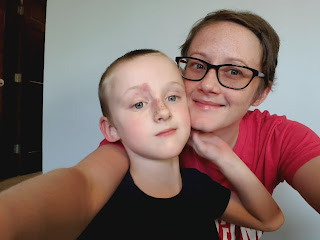 You're trying to live your life just like everyone else, but you didn't sleep last night.  You're going on years of very little sleep, and it's aging you.  Life is hard when you're sleep deprived.

You're budgeting, counting pennies, trying to make it all work.  Meeting your child's needs is expensive.  But you make it work because he's worth it. You cut costs where you can, and you work as much as possible, but the financial burden is a big worry for you.

You worry.  Will he be okay?  How will we get through this?  Will he ever make a friend?  Why my child?  Why me?  I wasn't prepared for this.  Who will love and care for him when I die?  I can never, ever die.

I won't tell you that "you're the best mom," because I know that you had no choice.  You do what you have to do.  When you become a parent, there was no way to know what kind of child you would get.  You got "the difficult child," so that's the child you stepped up to parent.

I won't tell you that "I don't know how you do it, I just couldn't do it."  I know that saying hurts, even though it wasn't meant to.  Because honestly, you don't know how you do it either.  You just do.  No one knows what they can do until given the opportunity.  You aren't stronger or more patient than anyone else...you just became the parent your child needs.  It looks hard to other people because it IS hard.  It's just as hard for you as it would be for anyone else.

I won't tell you that "God won't give you more than you can handle."  Because He will.  He does.  In your case, He did.  I do know, though, that God CAN handle autism.  He will give you the tools you need, and more importantly, the PEOPLE you need to get you through.