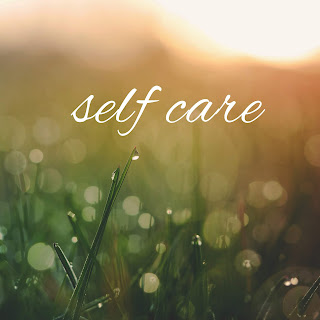 "Self care" is all the buzz in parenting right now.

It's definitely "a thing" in special needs parenting.  It's almost as if just writing the words "self care" feels like I've jumped on the bandwagon.

...but it's definitely a thing, and it's an important thing.

When Colin was diagnosed almost two years ago, the autism trained pulled up and I took the front row seat.  (As you might guess, trains are a thing at our house right now!)


This time last year, my desire to advocate and speak up for Colin and his needs amped up, and I felt the need to help more kids.  I was seeing the amazing progress that Colin was making due to ABA, and I wanted all kids to have access to this life-changing intervention.

In the fall, I said to my husband, "I just want to write and for someone to pay me to talk about autism, is that too much to ask for?"

Two weeks later I had a job offer to talk about autism.

I just knew that it was exactly what I wanted to do.  My life was going in this completely different direction than I had ever planned on, but it just felt right, I was meant to do this.

That was about eight months ago.

In January, I got sick, and I just couldn't get better.

My illness gradually turned into a full-body rash.  It was itchy, unsightly, annoying, and a tad bit worrisome.  Four different doctors didn't know what was wrong with me.  When we went to Disney, I wore pants so as not to freak anyone out with my unknown rash - I didn't want to be kicked out of the Happiest Place on Earth!  I hoped that ignoring it would make it go away - you know, like when your car makes a weird noise so you just turn up the radio to drain out said noise...that didn't work.

As time passed, the rash spread more and got worse.  I was so itchy that I couldn't sleep at night. 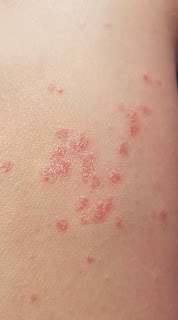 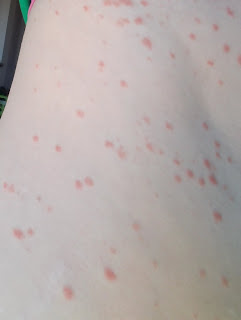 From January to April, I was plagued with this rash.

From January to April, I was also pretty stressed because I had taken on too much:

I was working my part time school SLP job across three different schools.  That meant driving between schools, doing therapy and evaluations, and meeting IEP deadlines.

I had my early intervention SLP position with Birth to Three.

I was the state director of a nonprofit.  I was trying to plan a Light It Up Blue Event, an annual conference, and find sponsors and donors for said events.

I was promoting my children's book and going to different schools to read for Autism Awareness Month.

I am also a mom to two kids.

One of those kids has autism and attends ABA daily, and the clinic is almost an hour from our home.

Throw in a marriage, soccer practice, church, grocery shopping, cleaning house, wanting to write more books and keep up with my blog....the list goes on and on.

Now, I have a great support system.  My husband has always helped around the house, he does so much for me and the kids (including making my coffee every morning, even though he doesn't drink coffee himself.)  My dad and mother in law help get Colin to school when I'm working.  My Mawmaw does my laundry for me on the days she helps babysit.  My mom is always willing to take the boys on adventures with us.

I'm spoiled and blessed, and I know all of this.

...but I'm still not supermom....even though I tried and wanted so desperately to be.

I started to tell people "no" and "not yet" when they asked me to do things.  They were things that I really wanted to do (like serve on a different organization's board and record a continuing education course for an SLP/BCBA website), but I knew that I had taken on too much.  I thought, "Oh, this is what they call "self care."  I just need to start saying "no" more often, for my sanity.

In April, when my stress level was at an all time high, I got a diagnosis for myself: guttate psoriasis.  This is an autoimmune disease that is usually triggered by strep (yep, had that!) and made worse by stress (yep, had plenty of that too).

About that time, a wise friend said she was worried about me.  She said, "I've seen moms like you push so hard that they burn out."

Until she said that to me, I honestly didn't know that burn out was an option...but it hit me like a ton of bricks - I was setting myself up for exactly that.

You see, I had taken the weight of the autism world onto my shoulders.  I felt that it was my responsibility to fix all the things wrong in the world.  For someone whose kid was getting the best services possible, I felt that it was my duty to share that with the rest of world - let them know what is possible with the right services.  And not just stop there, but work to make sure that more kids can have access to ABA in the future.

And the weight of the whole autism world...it's really, really, heavy.

I've had moments recently where I've thought, "I don't want to be the champion of all of the things...I want someone else to take over.  I just want to be a normal person who lives my life and just thinks/worries about my own kids and their needs.  And for now, I hope that's okay, because it's what I need to do.  I'm not finished advocating, fighting, and educating...I'm just stepping back for a while.

This is me stepping back.  I'm saying "no."  I'm taking care of me, but also taking care of my family.  When your very wise six year old says, "Mommy, I want you to quit a job," you don't brush it off.  I don't want my kids to look back at their childhood and think that Mommy just worked all the time.  They're growing up fast, and I don't want to miss it.

I kept having this phrase pop into my head..."take a leap of faith."  I had no idea what that meant.  I fretted about it for a while, and I waited.  And waited.  And waited.  Then, things just started to unfold, and here I am.  "Take a leap of faith," didn't mean what I initially thought it did.  It ended up meaning, "This thing that is so important to you can't be your whole focus right now."  Honestly, that's not the answer that I wanted it to be...I was hoping and praying for something else...but it just turned out different than I thought.  Once I made this decision though, I felt peace.  Peace is good.  I know it's the right decision right now.

Yes, I still want to help other kids.  I want to help make ABA more accessible to every child in the state of West Virginia...but that's a really heavy load for me right now...and that's also really hard for me to admit right now, but my goal here is total transparency.  While I feel like this autism life is my calling and purpose, I have to be present in all the parts of my life.

I also want people to know that absolutely nobody has it all together.  I've gotten frustrated over the last few months when people would say, "You're supermom, how do you do it all?"  Well, I was doing it at the cost of my health.  I was doing it at the cost of my happiness.  I was stressed.  I felt pressure to do and be everything, and it was too much.  I had a son telling me that I worked too much.  What you saw on the outside was a mom getting everything done, but on the inside, I've been a stressed out, worried, not-good-enough, part-time-everything, itchy, over-eater (because, ya know, I eat my feelings).

While I want to do, be, and fix all - I'm learning my own limitations.  It's just taken me 33 years to see it.  Along with "self care" I'm working on "self awareness."  In this self awareness journey, I truly am realizing that I'm not good at everything, no matter how much I want to be...and that's (going to be) okay.

Self care doesn't always look the same for all of us.  For some, it might look a spa day.  For some, it might look like a nap.  For others, it could look like coffee with a friend.  For some of us, it means giving up things that we are really passionate about because we just realize that we can't do it all.  I won't lie, there's some feelings of guilt with these hard decisions, but that's something else I'm working on too.

So, if I seem a little quieter than usual, it's intentional and necessary right now.  It's for my health, it's for my sanity, and for my family.  I'm learning that I'm just one person, and I just can't do it all.  It's called self care, and it's this new thing I'm trying out.