It's been almost a month since my last post....geez, did you guys get worried about me?!  I never go that long!

I've been so stinkin' busy.  I have five jobs...Finley says I need six.  I'm working on a lot of different projects right now and I'm super excited about all of them....but I'm also ready for a week off for Christmas break!!

Colin has been talking so much.  *insert heart eyes and praise hands and all the celebration emojis*  he is naming colors without any prompts or models.  He tries to imitate almost all words that we do model for him.  He's even said some 2-syllable words which is huge because he mostly shortens words to one syllable.  Last week he told me he wanted to watch Muppets on his device.  I said, "Muppets?"  He verbally said, "muh-peh!"

If you remember, my Pawpaw passed away in March.  I recently printed some pictures of him.  Colin has been obsessed with them. Today, he pulled out the stack of pictures and lined up all the ones that had Pawpaw.  He pointed to every single one and said, "Pawpaw" as he touched each one.  He misses him.  I hope he understands where he is, but I don't know.  Death is a hard concept for any four year old....but I do know that Pawpaw would have been so proud of Colin as he is learning to talk.  And I know that he would love that Colin says "Pawpaw" so well. 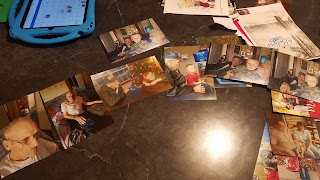 In other news, Finley determined today that "it isn't fair, I don't get to do anything I want to do.  You're no fun."  That means we are parenting right... right?

Then later he looked at me and said, "in the shadow, you kinda look like a man.  You look like you have a beard."

Wow, he's really on a role just 7 days before Christmas...but he also wrote me a note that said he loved me, so, I guess that balances out.