You might get tired of reading this phrase over and over, but it's true:

with autism, the small things are really, really big things.

I wrote about this in my book, and it's still something I struggle with often...I feel like I have two only children most of the time.  Finley wants to play make-believe.  Colin just isn't there yet.  Colin wants to play with Finley, but it usually only happens when they are rough-housing, playing chase, etc.  So I feel like I need to entertain both of them all the time.  When they are on two different levels, that makes it hard, which stresses me out, which brings on the mom-guilt...you can see where this is going.

As they get older, they seem to be interacting more and more, which makes my heart so happy.  We were playing outside a couple of weeks ago.  They were rolling down the hill.  The next thing I know, they're doing what Finn calls, "the double roll."  They were holding tight to each other as they rolled down the hill as one mass of little boy.   They were laughing and having fun together.

That's a cool word to use as an autism mom, because I know many children with siblings on the spectrum never experience anything together.  I am so grateful for the moments of togetherness that they get to share as brothers.

Then the chickens came over and bowed to Finn.  That's what they do when they want to be held.  Finn was trying to put the chickens on Colin's lap...Colin was pulling on Finn, wanting to "double roll" some more.

(A totally unrelated thought, but I never would have guessed that chickens would be such good pets.  There.  I admit it.  I was wrong once.  Just once, mind you.  About the chickens.  That's the only time...)

Finley immediately turned into a little therapist, and he didn't even know it.

He said, "Roll? You want to roll?  Tell Bubba 'roll'."  He is the most amazing big brother.  (Also know that they fight like cats and dogs over control of the TV...which leads me to my next point today...)

We have had some screen time issues as of late.  My child, who shall remain nameless (cough-cough-Finley-cough-cough) thinks he needs the phone, iPad, computer, TV, something with a screen, all the time.  It's a problem that I caused.  Any time I needed to do something with Colin, I gave him his iPad.  Then it became "Oh, I can have this all the time," to which mommy and daddy are fighting against as we speak.  Send up all the prayers and positive thoughts our way...we need them!

Today I just said, "no TV."  It's been off, and no one is fighting over what show is playing.  Colin doesn't just sit and watch it, but he thinks it has to be on for the background noise I guess...but no background noise today.

I threatened to give away all of the toys...you know, since he doesn't play with them and thinks they're all boring.  He decided to go into the attic and bring down his Imaginext toys.  I look over and see this: 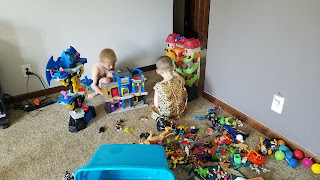 They're playing together.  Now granted, it's more parallel play on Colin's part (definition: playing beside other children), but he is watching Finley.  He wants to be there with him, he wants to play.  He is playing appropriately with toys, which is also so big.

If you don't have a child on the spectrum, I hope that you never take for granted that your children play together.  This might seem like an everyday thing for your family, but for ours, it's a really really big thing.