We went to Target today as a family of four.  This was Colin's best Target run ever.  He sat in the buggy, or held our hands as he looked at stuff (and picked out a Branch Troll stuffed animal).  We also found a cool little bubble machine on sale.  Finley picked out an Imaginext toy.  They both got new bedding, so it was a win-win-win kind of day!

We got home, and they both started playing with the Imaginext toy.  Colin was putting the balls into their spots.  Finn was helping him.  It was so sweet.

This evening, we built a campfire and spent the evening just playing in our backyard.  The boys were rolling down the hill together, Finn was giving Colin piggy back rides.

We broke out the new bubble machine and they were both fascinated.  Finn wanted to go back to rolling down the hill, but Colin was engrossed with the bubble machine.

Finn kept calling his name, begging him to play.  I even tried walking him over to Finn, but he ran right back to the bubble machine.  Finn almost cried and said, "I just want to play with Colin."

That breaks my heart every time it happens.  I try to say things like, "He will play when he's ready," or "give him a minute," but really, I want Colin to play with Finn too.  Brothers are supposed to be built-in playmates.

After a while, Colin ran over and started to play with him again.  They rolled down the hill, laughing and having so much fun.  They played in the sand and on the pirate ship together too.  Finn came over to the fire once.  Colin came over, grabbed his hand, and pulled him back over to the hillside to play again.

Finn would say, "Get our picture, Mommy!"  So I took several pictures.  Colin will now say, "Cheese!" when we take pictures, so that's cute too. 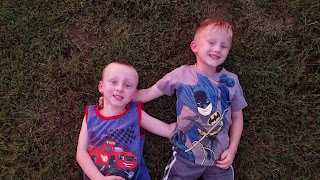 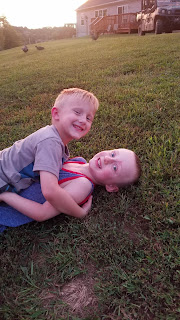 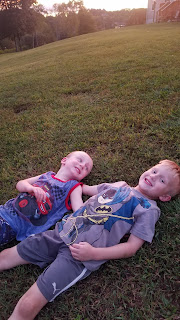 Colin sure does love his Bubby.


It seems so simple and common - two brothers playing together - but these moments are so special to all of us.  I know the boys will look back at these pictures someday and remember how much fun they had playing together. 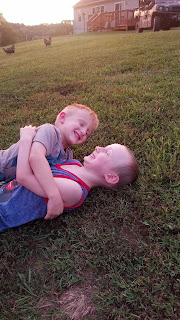 You can see the love in Finn's eyes.  I tear up looking at this, he's such an amazing big brother.