Remember the last post where I talked about "finding the happy?"

Yeah, that mushy feeling is gone.  There is no happy in this post.

Brace yourselves, this is a long one.

So we are vacation.  My mom, mother-in-law, the boys and I come to Williamsburg, VA for a little getaway.  We swim, go to the beach, outlet shop, and eat ice cream, because vacation.

We went down to Colonial Williamsburg this evening.  It's late, the boys are tired.  We went into the candy shop.  Colin picked out what he wanted, then wanted it right now.  So Nana took him outside for a walk.  We made the rest of our purchases and headed out to meet them.

Nana wanted to get some postcards to send to her Sunday School class.  I directed her towards the William & Mary bookstore.  Grandma took Finley up to the children's section on the second floor.  Colin and I stayed outside for a bit, then we headed inside.

He saw the escalator.

Escalators are entertaining for him.  We were riding up, then down, up , then back down again.  He was having a good ol' time. 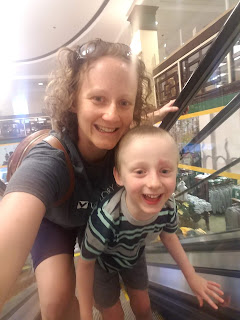 I tried to direct him to the toys and books once, but he wasn't having that, so back to the escalator we went.  I wanted Finn to be able to look for a while, so I was keeping Colin entertained.

After several minutes I heard someone calling, "Ma'am.  Ma'am!"

I ignored it twice.  For starters, I don't feel like I've reached the "ma'am" stage of life just yet.  I'm 32.  She couldn't have been talking to me.  Besides, we had been there a while, surely it was another "ma'am" (of a much older age than Yours Truly).

The third "Ma'am" felt pointedly directed at me.  I turned toward the irritated voice, and what do I see?  What felt like 30 people, just staring at us.  Looking at me and my son like we were alien beings.

"Ma'am, we can't have you playing on the escalators, it really isn't safe."

"He is autistic, I can't just make him stop."

I got to the top of the escalator, told Grandma and Finn that we were leaving.  I scooped up a screaming, rigid Colin in my arms and headed out the door.  I just wanted out of there.  (When I got back to our room, I called my husband.  He said, "What you should have done was pick up a $1 bookmark and go stand in line."  HA!  That would have really shown them, right?!)

As we exited the bookstore, a foreign man and his teenage son were talking about us.  My Mom saw the teenager make a motion as he spoke, like, "he needed a spanking."  She approached them and explained that Colin has special needs, and he cannot help acting this way.  The man just kept saying, "He didn't mean that I was going to hit your boy, he meant that I would have hit him if he did that."  She reiterated that Colin cannot be punished for this particular behavior in this situation because he cannot help it.  The language barrier was too much here, I believe, because he never seemed to "get it."

We made our way back to the car.  Colin was very upset.

Was he upset because he was so abruptly stopped while he was just having fun?

Or did he understand what had just happened?

Or could he feel my energy?

I was so hurt because she kept at it.  She warned me.  I explained that he had autism.  I was basically saying, "Thanks, but I got this."  She could have stopped there.  She had done her duty in warning me about this very dangerous escalator.  If we got hurt, that would have been on me.  No, she kept talking. I felt like I was being belittled, judged as a parent.  In my mind, she was judging my child.

I walked my shaking self back into that bookstore, knowing full well that my voice would crack as soon as I opened my mouth.  The tears would fall immediately, but what I had to say needed to be said.

The store had emptied, and the woman working at the register was now alone.  I stepped up to her and said, "I just want you to know that, if that happens again, please talk to the parent personally.  That was so hurtful to turn around and see 30 people staring at us like that.  We get a lot of negative attention, and I was trying to avoid that by letting him ride the escalator."

She explained that she was not allowed to leave her register to speak to people on the escalator.  She said that they often have people getting hurt on the escalator, and that someone just had to fix it yesterday because of people putting their hands on it.  He (Colin) was going to get hurt.  She was sorry, she didn't mean to hurt my feelings, but she was just doing as her manager instructed.

I went on to say, "I am not saying that you don't have people getting hurt, but he was not going to get hurt.  I was right there with him, helping him get on and off.  I wouldn't let him get hurt for anything.  I had tried to direct him to the toys, but he was not interested.  His brother was upstairs looking at books.  I was trying to keep him quiet."

I know my son.  I know that he will get upset, scream, cause a big scene.  These behaviors often distract other patrons.  I don't like when that happens.  I used to care about the "comfort" of the other people.  As he ages, and I grow as a special needs parent, I care more about him.

I do what I can to avoid negative attention on my son.

Colin calmed down by the time we made it back to our room, but he seemed....deflated.  He soon just went to sleep.

Tonight broke my heart.  Colin "just looks like a normal little boy," I hear that a lot.  Because of this, people judge him so harshly.  They think he is just being a bad boy.  That I am being a bad mom.

I don't really know what my purpose is in sharing this story...well, no, that's a lie.  I do know why I am sharing this.

I want everyone to understand how hard it is sometimes.

He is just a little boy who finds joy in things that aren't "typical."  This is okay in our own little world, but we have to leave the safety of home sometimes and enter the neurotypical world.  We have to be around people who don't know him, and people who don't understand autism.

He has every right to be out, enjoying the world in his own way.  And I mean, how sweet is it that he can find joy in such simple things like riding an escalator?

I know now: because we have to be.

We have to stand up for our babies.

We have to fight for our kids.

We have to advocate for them when they can't do it for themselves.

We have to educate, because the general population just. doesn't. get. it.

Maybe I am silly for thinking that my little blog will make a difference...but I hope that it does.  I hope that, by sharing our story, Colin's story, that I can help bring more acceptance and understanding.  All I want is a little more compassion for those who are different from you.  No one likes negative attention, and my precious children definitely don't deserve it.

People with autism might be different, but they are not an ounce less than anyone else.

And heads up, apparently escalators are super dangerous, and we all need to be hyper vigilant and extra careful whilst riding them...you have been warned.