My mom said something to me that I often think to myself:

I think this all the time. I've written about it before, but the thought is always there, so I'm writing about it again.

I have two sons.  They are a year apart...built-in playmate, right?

They might wrestle or rough-house with each other.  They will hug, kiss, and cuddle each other as much as two wild little boys will do...but to play together?  This just doesn't happen.

Colin might play next to his brother, but never really with his brother.

I don't know that you can truly grasp the sadness in that statement unless you see it in your own children.

To have a brother, but not a playmate.

To have a brother, but not a friend.

To have a brother, but feel like an only child.

Don't get me wrong, my sons love each other.  They have a very special bond that only brothers can share.  Colin looks up to Finley, and Finley looks out for Colin.  Finn will even tell people that Colin is his best friend.  Colin will gravitate to Finley in a group setting every single time.

After my mom said that, I felt sad for a minute, as I always do when I think about it.  Then I found the Happy in the situation:

At least Finley has a brother.  We thought we would never have any kids.  Then we had Finley after a year of fertility treatments.  The likelihood that he would be an only child was very high.  Then God surprised us with Colin.  Their relationship might not be the "typical" brother-brother relationship, but it's theirs.

I love that they love each other...I just wish they could play together.  I hope that, one day, they will. 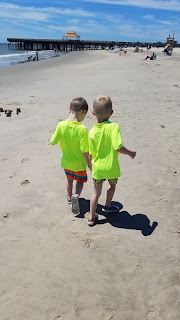 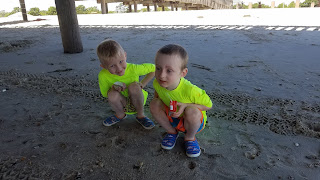