My son, Colin, received his Autism Spectrum Disorder (ASD) diagnosis at the age of three and half.  Three and half isn’t a terribly late age to get an autism diagnosis, but it isn’t early, either.  You might wonder, “As a speech language pathologist, why did you wait so long to get a diagnosis?”

Hope.  I waited because of hope.

I hoped he was just delayed.
I hoped he would talk soon.
I hoped the right therapies would rid him of his sensory processing problems.
I hoped that, with diligent work at home combined with therapy, he would make progress.  That progress would make the “autism-like” symptoms disappear.
I hoped that it wasn’t autism.

You see, I saw the red flags.  I knew his communication skills weren’t age appropriate.  I knew he didn’t play like my older son.  He had belly issues and didn’t sleep well.  I knew there was something.

For a while, I didn’t know what that “something” was, it was just a difference of some sort.  I clung to all of this positives with everything in me, just hoping it wasn’t my greatest fear: autism.

By the time we took him for the official diagnosis, I knew.  Going to the psychologist was just a formality that we needed to do in order to get him the services that he needed.  My baby had autism…

…and you know what?

His autism diagnosis wasn’t the end of the world like I thought it would be.

Five years into this parenting thing, (and just nine official months as an autism mom), I don’t know what I was so afraid of.  I have two wonderful, beautiful, smart little boys.  One just happens to have autism.

Yes, my son has autism, but he is amazing.
Yes, things are sometimes more difficult.
Yes, our lives look a little different than I had planned years ago.
Yes, he has to work so hard to make it in this neurotypical world, but as his family, we are right here every step of the way.

He is different, but not an ounce less.

Do you want to know something else?

I still have hope, but not just that, I have faith.

Your child’s autism diagnosis might be the end of the dream you had for your family’s life, but it also the beginning of a new journey.

Don't give up hope. 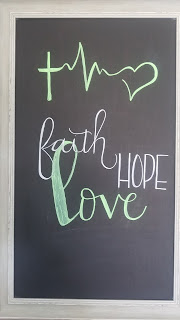