The questions I get most often are about Colin's communication device.  I talk about it a lot in my book, but wanted to share the specifics here too.

The device  itself is an iPad....I know, I know, I'm not an Apple person.  We are an Android family....I don't even know how to use our Mac computer in the office...but the app he needs is for iPad, so we have an iPad.  The sacrifices we make for our children, right?!  I kid, I kid...I don't really care about it, but some people are very much aligned with Mac or PC and have strong opinions either way, lol!

I'll skip the whole AAC educational lesson because I can't actually share parts of my book for legal agreement reasons (you can find my book here).  I'll just tell you about how Colin uses his device.

He uses Prentke Romich's LAMP Words for Life.  LAMP stands for "Language Acquisition through Motor Planning."  You can read about it here, it's pretty cool!

"The Unity® language system is the most established AAC language system in the industry. It's used by tens of thousands of people using AAC and has been translated into more than a dozen languages."

We have this set on Colin's specific vocabulary right now.  It has things he uses everyday, preferred toys, foods, places, etc.

It starts on the main screen: 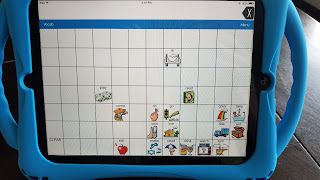 Let's say he wants to eat a Popsicle, he goes to the EAT category: 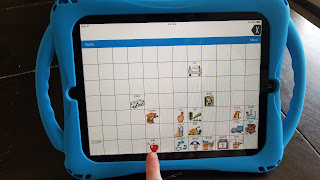 Popsicles are found under the SNACK category: 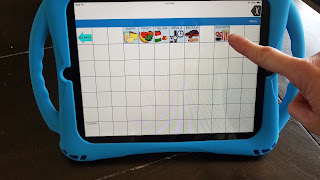 And when he presses the "Popsicle" picture, the device will say it! 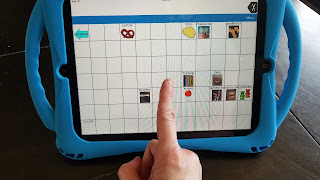 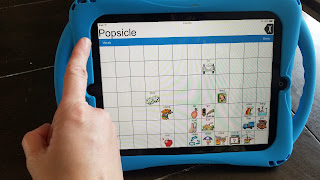 This is where the LAMP app is special.  He is learning through motor planning.  He has learned exactly where the icons are, and his brain has created a memory of that.  Popsicle will never move on that device, even after you add all of the vocabulary in the world.    This makes it easier for him to learn to use new vocabulary every day.  Sometimes, if the iPad lags, Colin is actually faster than it is!  He will hit the first button and immediately move his finger to the next spot before that screen even pops up.  Mr. Smarty Pants, that boy of mine.

This software has the capabilities to grow with him too (think Stephen Hawking's device that he used).

He knows his way around the device like I know my way around an all-you-can-eat buffet.  Whenever he wants something, he grabs his device and tells us.  And, oh!  How I wish I could capture his face when he tells us what he wants.  He turns and looks at me with the biggest smile you have ever seen, and his eye just twinkle.  He is so proud of himself, but I also think he feels relief.  I am so thankful for technology!

You see, Colin is so smart.  He has always known what he wanted, but just couldn't tell us.  I can only imagine what relief he feels to FINALLY be able to tell us what he wants in a way that we can understand him.

Communication - it's a powerful thing!