I keep a journal on everything Colin.  Any time that I am tryng to figure something out, I document.  He's not sleeping?  Okay, let's see why.

What did he eat that day?

Did he eat gluten or dairy without his enzymes?

Did he eat anything all?!

Did he play much and wear himself out?

By documenting everything I have been able to find patterns and figure out the cause behind certain behaviors, etc.  Another great benefit is that I can look back later and see all of the progress that he's made!

Regarding speech, his babbling/jargon didn't start until a year and a half ago.  I had not heard his "real" voice (other than screams and squeals) until he was two and half years old.  Now at four, he jabbers all the time.  He's also saying some words and attempting to say so many new things.

Receptive language, what he understands, has skyrocketed in the last two years.  He went from following zero directions to follow some one (and two!) step directions.  He will follow novel (new) commands and just blow my mind, like, "Did you just understand that and follow through?!"  He truly does understand so much of what he hears, and I never would have thought that just two years ago.

Expressively, he used to take us to things and point or reach and scream for it.  He did this just three months ago!  Now, he uses his AAC device to tell us what he wants.  He can do a 3-click navigation to make choices (eat-snacks-popsicles).  People see him using his device and say, "He is really smart."  Yes, he is smart.  He always has been - he just needed help getting it out and showing everyone!

This time last year, he would go to Grandma's house, drink a juice, then he was ready to leave.  Yesterday he spent hours at Grandma's house looking for treasures (old Beanie Babies) and sat on the bed while we worked on setting up a bedroom in a spare room.  (They don't call him "King Colin" at ABA for nothing!) 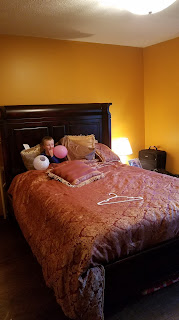 Just six months ago, I had not enrolled him in speech therapy, because I knew that he was not ready for that. Today, he goes to speech once a week and gets excited when we pull into the parking lot. 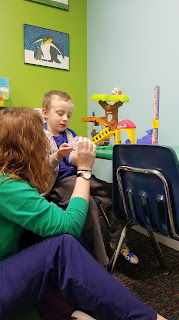