I recently watched a video from Kate Swenson over at Finding Cooper's Voice.  She described an outing that she had with her son over a year ago.  She had taken him to the mall to see Elmo.  It was in that moment that she realized he was truly different and that "this isn't okay."  She received a lot of flack after she shared her thoughts on this experience.

She posted a follow up video, and went into detail about that particular day.  You can watch the video here.  Cooper loved Elmo, so they went to the mall to see him.  She said that, in that moment, she saw "the fine line between joy and anxiety and fear."  She explains that all she could do was hold him in that moment while he hurt himself.  He hurt himself, but he wanted to be there so badly.

Although Colin is not self injurious, I so related to that statement:  the fine line between joy and anxiety and fear.  So many times, I have seen him be happy, but also overwhelmed.

To someone who doesn't live this life all the time, this might not make sense to you.  I want to try to explain it with an example we had recently.

We visited Disney World just after Colin turned three.  It was such an amazing experience, we went back this January.   We learned last year that both boys really enjoyed meeting the characters, so we made it a point to meet as many characters as possible.  What is a trip to Disney if you don't meet Mickey Mouse?!

We booked a Fast Pass+ to meet Mickey at the Town Hall.  Even though we had the Fast Pass+, we still had to wait in a pretty long line.  We were moved from one small room into another small room, only to wait longer.  We waited about 30 or 40 minutes....that is a long time for Colin.

By the time we got to Mickey, Colin was done waiting.  We stepped into Mickey's room, and there he was, in all of his talking-Mickey-glory.  We shuffled Colin in, and Mickey turned and talked to us...this is what happened next: 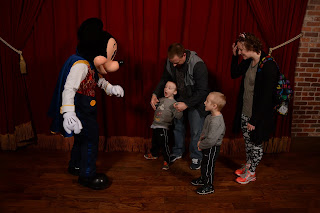 He loves Mickey.  He wanted to be there.  The Magic Kingdom is his happy place, he was having a great week.  There was so much going on though:  other people in the room, Mickey talking to you, Mommy and Daddy pushing you into this darkened room, camera lights flashing, people talking, new smells, you don't know what is expected of you, nor do you know what is about to happen...and that's just the external stuff that I know to tell you about.  Who knows what is going on inside his little brain as he tries to process new, unfamiliar experiences.

Within a minute, he was hugging and kissing Mickey: 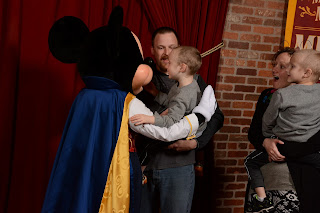 Even though Colin wanted to be there - he loves Mickey, why wouldn't he want to meet him?!  Those lower-level brain functions kicked in.  In that first picture, you can see that fight or flight response...he was definitely in flight mode.  He had so much going on that his system just couldn't handle it.  He went into flight mode.

When this happens, there is no reasoning with him.  If the flight or flight kicks in, we have to deal with that first.  It literally takes over and he can't do anything else in that moment.

Once we got him calmed down, he was fine.  He hugged and kissed Mickey.  All was good.

But that.  I think that is what Kate meant when she said she saw the fine line between joy and anxiety and fear.  Colin can be the happiest little guy, but too much sensory stimulation can send him into a flight response in the blink of an eye.

That is why everything - every outing, every fun thing - must be planned.  We need a back up plan.  We need an escape plan.  We never know when something will be too much and we need to remove him from the situation to give him a sensory break.  He has made so much progress recently, and he can usually let us know when he needs a break.  That is something we are ever so thankful for.

I don't want Colin to miss out on any childhood experiences.  Ever.  I want him to meet Mickey Mouse, participate in church activities, go trick or treating, and visit Santa.  We just plan ahead as best we can.  We figure out his needs and do our best to meet those needs within different activities.

We will continue to give him opportunities to experience new things.  We will support him through those experiences.  We won't give up.

And Mickey - if you're reading this - thanks for being so accepting and cool.