Suns Out, Buns Out

Do you know anyone who makes custom doormats?  We don't have a doormat for several reasons. One, we would just get it dirty.  Why buy something that I know we will ruin?  Two, it's windy here, and it might blow away.  Three, I think we would need a very specific doormat to properly prepare people to enter our home. It would need to read something like this: 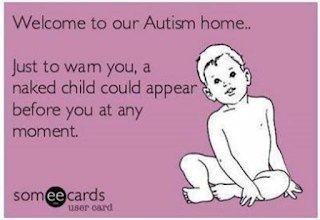 Yep. When I first read this ecard, I lost it.  I had never read a truer statement in my life.  Ecards,  it's like you know my life.  And that life includes a naked boy.

When he wore diapers all the time, he ran around in just a diaper.  Then he started to pee in the potty, so we switched to underwear.  I don't know what it is, but he would rather just be naked.   So "bye bye" to the underwear, says Colin.  This is one of those battles I don't always fight.  I say to myself, "Self, when he turns four, you have to address the nakedness."

So, that's next month.... I am mentally preparing myself now.  I should be preparing myself physically, because, man.  That boy is strong.  Trying to get pants on him is often a two man job.  Imagine trying to wrestle an angry crocodile.  Now, while you'e wrestling that croc, try to slip some pants on him.  Shew, that only took 5 minutes.  Bend over to pick up his shirt....and that little Houdini has already taken the pants off!  Getting him dressed counts as my daily cardio.

He doesn't argue with Grandpa.  He knows that Grandpa will make him wear clothes.  As soon as Grandpa walks through the door, Colin is getting dressed.  The other day, we had about 15 people at our house celebrating my Pawpaw's baptism.  A big group of people left.  Colin started peeking around corners, looking for Grandpa.  He slowly started to take off his clothes.  Grandma said, "Nope, Grandpa is still here!" Up he pulled those clothes, fast as lightning.

Because "bye" is his new favorite word, he will even tell Grandpa "bye" because he wants him to leave (so he can take off his clothes).  Grandpa will catch him and say, "Nope, you keep those clothes on."  Colin grins at him, waves, and says, "byyyye!"

This kid could honestly have a career in magic.  Sometimes I just blink once and BAM! ...Naked as a jay bird.  How is it humanly possible to remove every article of clothing that quickly?

I lose him in the house sometimes.  I know, #momoftheyear.  The thing about kids on the spectrum, they don't always like noise, but they are easily the noisiest person in any room!  His loudness makes him easy to locate.  Sometimes he gets quiet, and I have to go on a Colin hunt.  He's usually pretty easy to find, though - I just follow the trail of clothes!

His new favorite thing is house shoes.  It's not uncommon to find him running around in nothing but his Elmo slippers.  That counts as being clothed, right?!

It usually isn't a problem away from home, but he has tried to strip a few times away from home.  I really just have to laugh it off so as not to cry about it...

I love to take pictures of the boys, but that's hard to do with a nekked boy.  So if you see pictures of them with clothes on, know this:  I completely staged that photo!  You're welcome.  And the next time you see us out, and he's wearing clothes, you may congratulate me on wrestling a crocodile AND completing my daily cardio.