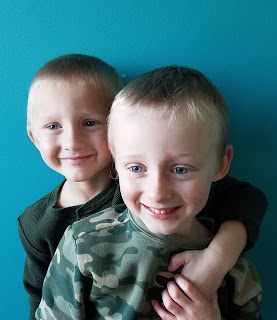 Do you know that a sizable portion of my fears and worries about Colin's diagnosis are actual for his brother?  I'd say at least 25%.  No, maybe 30-35%.  I worry about Finn almost as much as I worry about Colin.

How will Finn handle his brother's diagnosis as he gets older?  Will other kids pick on him because his brother has special needs?

My heart breaks a little each time Finn wants Colin to play with him.  I rejoice in the moments when he does play with him.  Finn makes comments every now and then about Colin not talking yet.  He used to say, "Colin is still a baby so he can't talk."  I always explain that he is a big boy, but talking is hard for him.  The other day he said, "Why did Colin grow up to be a big boy but can't talk?"  Holding back tears, I explained autism to him.  I said that Colin's brain just works a little differently, and talking is hard for him, but he is learning.  Finn was satisfied with that answer for now.

Finley is such a sweet, caring, compassionate boy.  I think that having a brother with special needs will only encourage him to build upon those characteristics.  I often tell Finn that God chose him to be Colin's big brother because he is the best big brother in the whole world.  God knew that Colin was going to need the best brother to look out for him and to love him.

I took this picture on Thanksgiving.  You see Finn's arm around Colin.  This is the only way we could get Colin to stand still for two seconds because he so desperately wanted my cell phone.  Finn is a trooper, even though, during picture taking, he said, "this is the worst day of my life."

I look at this picture and see their personalities so clearly.  Colin is wildly happy and energetic with a contagious smile.  Finn has his little grin and gleaming old-soul eyes.  He has arm protectively around his baby brother.  He will always be there for him and have his back.  I pray that they have a close relationship as they grow.  I pray that Colin looks up to Finn, and that Finn will love him and look out for him as only a big brother can.