As a parent or therapist, we celebrate our children's successes.  Every milestone, every improvement, every victory.  Your baby's first hair cut, first steps - you probably documented it in their baby book.  Unless it is a second or third child....then they probably don't even have a baby book!  (Hopefully they at least got a post on Facebook.)  My brand new nephew just rolled over for the first time this weekend.  It is super exciting to see our babies grow and learn new things.

As a speech language pathologist, communication milestones are my favorite.  Eye contact, smiles, laughing, babbling, cooing - be still my SLP heart.  If you were to meet Finn now, you wouldn't believe it, but he was a late talker.  Until he was two and half years old,  he almost exclusively said "da-da-da."   I was so worried that he would never talk.  His receptive language, what he understands, was always very advanced for his age.  Yes, I did standardized tests with my children.  No shame in my therapist-momma game.  From 15 months to almost two and half, he only said "baba" and "ice."

I will always remember when he added a third word to his vocabulary.  He was jabbering away in the bathtub and said, "Ninn."  I yelled in to Curtis, "Curtis, he said Ninn!  He said his name!"  And of course I cried.  After that, he just took off.  He was talking in sentences shortly after that.  He's almost five, and just this week he used words like: unbelievable, deflated, baptism, and preposterous (thank you, B.J. Novak, for The Book with No Pictures).

As I've written before, words are hard for Colin.  I say he is nonverbal, but that isn't completely true.  He will use words occasionally, but nothing consistently enough that I give him credit for it.  Spoken language is not his main mode of communication at this point.  Imitation is hard for him, so when he does get something, I cry.  Finn has picked up on my "happy tears" too.  If he does something well or something nice, he says, "Am I gonna make you cry?"

In the last couple of weeks, Colin has started to imitated "shh."  That one tiny syllable means so much to me.  Shushing each other has become a cute little game that we play together, and I love it!    Last night, I was cutting broccoli.  He does not like to eat any vegetables, but he was wanting to touch the broccoli.  As he picked it up, I said, "that's broccoli."  With more concentration than I have ever seen him have, he deliberately said, "bah-uh-ee."  I about peed my pants, guys.  I get excited over a single sound (shh), so a three-syllable word, what?! Who are you, and what have you done with my child?!

When your child is behind or delayed in any way, those victories seem to mean so much more and give you an immense sense of pride.  Things don't just come easily for them. You see the struggles.  You know how hard they have to work just to be, so an accomplishment like "bah-uh-ee?!"  It truly deserved confetti, streamers, and the Hallelujah Chorus playing in the background.  Things that come easily for most kids, well, they take a lot of work for kids like Colin.

I know you get excited if your neurotypical child says a new word.  Finn amazes me everyday with his ever-expanding vocabulary....but a new word for Colin isn't "just another new word."  That word carries with it so much hope and assurance.  Assurance in his ability to engage in an activity.   Assurance that he truly is listening to me babble all day about random things.  Assurance that he is learning new things every day.  Assurance that he is making connections with the words he hears.  Hope that more words are in his future.  Hope that, one day, he will walk in the kitchen and say, "Mom!  I love broccoli!" .....okay, that's maybe a stretch.  Maybe, "Mom, no more broccoli!"  Yeah, that's probably more likely. 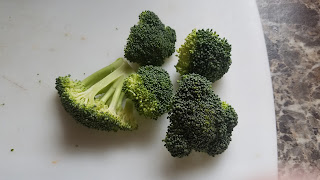