Autism might dictate his behavior, but it does not define his character.

What does that even mean?

Because Colin has autism, I can expect him to behave in certain ways.  He gets overwhelmed in stores and might cover his ears.  He sometimes screams.  Visually, he is drawn to certain things - he could watch flowing water indefinitely.  If someone asks him a question, he doesn't verbally answer, and might not even acknowledge their presence at all.  He enjoys doing things like shaking tassels.  He likes to drop things just to watch them fall (like balloons or confetti).

I say autism dictates these behaviors because they are pretty typical of what you see in someone with autism.  If I saw a stranger doing these things, I would assume they have autism too.

BUT....these behaviors do not make him Colin.  Autism does not define his character.  You see, no two people with autism are alike!  My own grandmother has a hard time with this concept.  She once knew a person with autism, so she assumes everyone with autism should be like him.

Colin is happy.  He is almost always smiling at home (now this isn't always the case when we are out and about, but going out can be stressful and difficult for him).  Not to say that he is never frustrated or angry, he is human, afterall!

He is the best cuddler I know.  He is very affectionate, always giving hugs and kisses.  I call him my little love bug.  If we are on the couch, you can bet that he's right there cuddling.

He absolutely loves the Muppets.  He loves sticker books.  He loves his big brother and enjoys wrestling and cuddling with him.  He's also a big fan of cars, balls, balloons, and bubbles.  He's never met a trampoline he didn't like.  He would live outside if he could.  He loves swimming, playing in the dirt, running and taking walks, and being with his 50+ chickens and ducks.

He might have autism, but that isn't who he is.  I think that is what I most want people to know.  He is still just a little boy with his own (very sweet) personality! 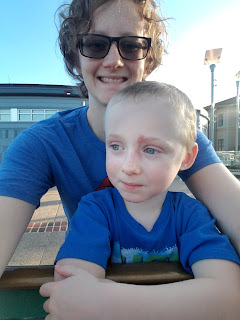